So after many hours and frustrations in regards to the 1992 ACS BMW I finally got it out in time to participate in a local forums opening cruise! Shortly after the Performance World Show in March I noticed that the engine all of a sudden would make a horrible sound resulting in loss of power and misfire above 2500rpm. At first I thought perhaps the cams were out of sync so I re-timed them yet again, this did not solve the issue. After that, I changed the DME, Fuel Filter, Plugs and anything that would cause such an issue under Load. Finally, after advice from some BMW shops, it was concluded that the chain guides were most likely damaged. 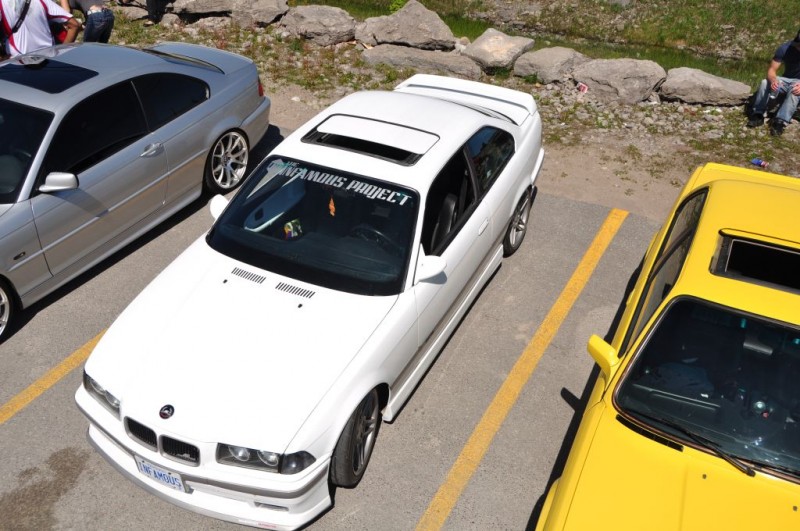 Lucky for me, a good friend (Boots) was kind enough to give me his old M50 motor from his 1992 BMW. He recently had an S52 swap into his car and offered me his motor as a good gesture. Needless to say, I did not waste any time. Friday night at 7pm I started working on the car and by 12am the replacement engine was in place and bolted down. It would have been sooner however, I swapped over some key parts like my: Turner Motorsports Lightweight Flywheel, Clutch, UUC Pullies, Changed the Plugs, Oil, Tightened the oil pan bolts, Installed the OBD2 headers etc.

The car sat for Saturday and Sunday morning me and my buddy flushed and bled the coolant and got the front end of the car bolted back on in efforts to catch up with the 2010 opening cruise for MaxBimmer . We were running a little late and unfortunately no one was able to provide us with route information as it is always kept a secret until the cruise starts. All we knew is that the cruise was to come through my town of Peterborough later in the day. Me and my buddy set out to start driving to key points to figure out where we might intercept them but had no luck. We drove approximately 100kms and just as we gave up and were heading towards home we intersected the cruise right in the middle! What Luck. 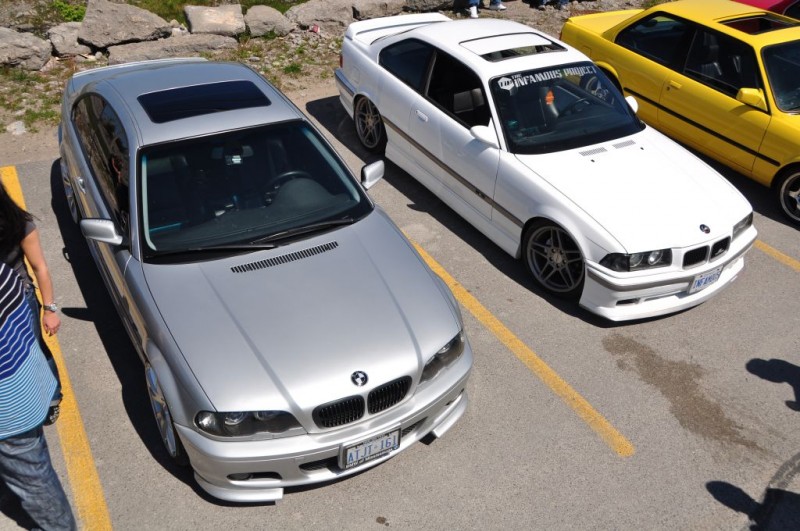 The weather was absolutely beautiful and my arm is burnt to prove it. There was about 50+ BMWs that were on the cruise and although a few bad apples that don’t know the difference between a race track and a cruise made things a little stressful, there were no tickets given. Near the end we were confronted by the O.P.P (State Police) and they pulled us all over on the side of the highway. No tickets were given, just an hour wasted.

The car never skipped a beat and ran beautifully. Approximately 4000rpms most of the time due to the 3:91 LSD. With the fan delete mod and no back up cooling the car performed amazing and never overheated or gave any issues. We ended up travelling a total of ~400kms (250miles) and only used just shy of 1/2 tank of fuel. I was very impressed.  Below are a few more shots from the cruise.